Sep 21, 2020 | For Individuals and Families, News and Events, The Connection Newletter 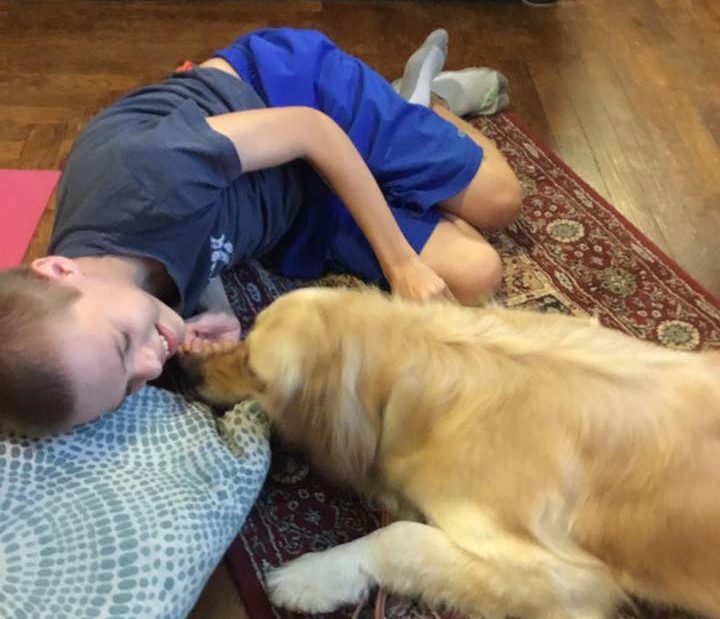 A service animal can be a great benefit, and friend, for a person with a disability. Service animals are trained from birth to provide their owners with a spectrum of supports. Finding the perfect service animal can be a challenge, taking time and even more hard work. Patti Kruppo, mother of STC member Evan, shares her family’s journey of getting a service dog for her son Evan, and some of the obstacles her family faced along the way. Evan’s new service dog, GiGi, has become a loving member of the Kruppo family, and provides Evan with some of the supports he needs.

In Her Own Words

For years our family, the Kruppos, thought that a service dog for our son, Evan, would be a beneficial and great idea. Evan is a triplet, and was diagnosed with autism at just 16 months old. He has some unique and challenging behaviors and we believed that a service dog would be able to assist him—providing behavior disruption and promote socialization skills.

There was a major influence that pushed our family to follow through with the hard work required to get a service dog for Evan—author Stephen Kuusisto, who I met in 2015. When I met Mr. Kuusisto, I voiced my concerns that Evan might not like a dog and he told me it didn’t matter. I don’t remember the exact words of our conversation, but I remember him saying something like, “the dog will be beneficial to Evan regardless of his reaction to it.” Looking back now, that conversation is ironic because 4 Paws For Ability said something very similar to Stephan Kuusisto during our training classes.

Our family soon after applied to two service dog organizations in New York state, with no success. We felt like we were hitting brick walls everywhere we turned. We attempted to get a service dog through the Office of People with Developmental Disabilities as an Assistive Technology/Environmental Modification, but after months of back and forth between our MSC and OPWDD (and feeling no closer to an end result), we decided to go a different route. Our family was feeling quite defeated until at an EVAN (Enlightening Views of Autism Now) meeting, a committee member, Kathleen, offered the help of her Girl Scout Troop to raise funds for a service dog for Evan. We had done a lot of research at that point and sifted through many different organizations. We came across 4 Paws For Ability and soon realized that they were the only organization that could meet our family’s specific needs. The organization allows you to keep your current pets and allows you to keep your retired service dog. We began our fundraising efforts!

With a ton of community and donor support were able to raise $17,000 over the span of about 5 months. We began training classes with 4 Paws For Ability about two and a half years from the date we finished fundraising. Our training dates changed three times because of various reasons, and we ended up getting GiGi, Evan’s service dog, about 3 years later. GiGi has been in training since birth. Evan, myself, and Catherine (Evan’s self-directed community habilitation worker) spent 12 days of intense training at 4 Paws (located in Ohio). During that time we learned about the proper way to train a service dog. We saw firsthand the dedication of the staff and volunteers, and the love, time, and effort spent on every dog that leaves the facility. The staff is on call 24/7 and is available to the families for questions and advice.

GiGi was highly-trained before we met her on August 22, 2020. We had to send extensive videos and documentation of how Evan normally acts and what our household is usually like. The trainers used this information to decide on the best match for Evan. They trained GiGi to encounter the behaviors that were exhibited by Evan. The training continues fairly intensely for the first year of her service life. She has been trained as part of a 3-person unit. Evan is considered her partner and then she has a trained adult (myself or Catherine) as her handler. GiGi has been trained to track Evan, provide behavior disruption, be tethered to him, and numerous other skills and tasks. She will continue to learn and grow, especially during her first year of being Evan’s service dog.

We still have a lot of hard work ahead of us, but it is worth it! It was a five-year process for our family, and we started dreaming about it even earlier than that. GiGi is a gem, and was well worth the wait! The entire family loves her and we are looking forward to continuing training and putting in the hard work so she becomes the perfect service dog for Evan.