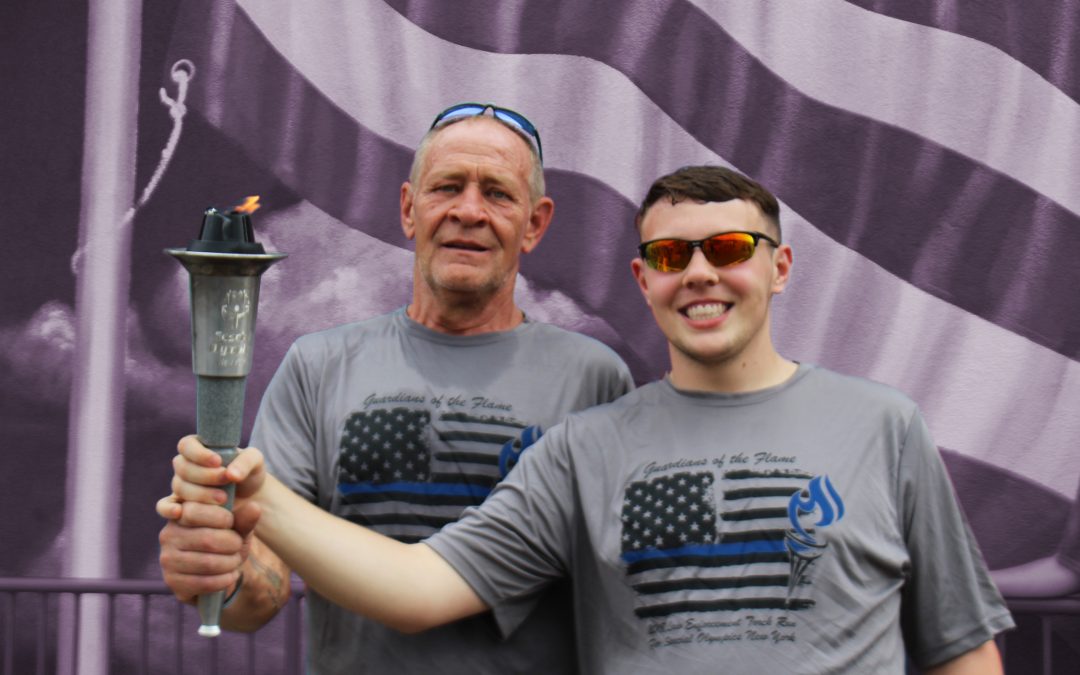 We are pleased to bring you another in our series of blog posts from family and friends of Southern Tier Connect. Kathy Jo Szabelski, the author of this post, was married July 26, 1997, to her husband Pete, with their son, Michael coming soon after in 1998. Pete worked construction/landscaping, etc. until Michael was diagnosed on the Autism Spectrum and he needed someone to be at home with him. With Kathy Jo working at Community Memorial Hospital as an Administrative Assistant and carrying their medical insurance, Pete became the primary caregiver for Michael. Over the following 15+ years, Michael has gained independence, and both Kathy Jo and Pete have been able to explore career opportunities that were not possible when Michael was first diagnosed. Kathy Jo notes that part of Michael’s success and progress is due to Dad and Mom being always on the same team – “Team Michael!” They have worked tirelessly to provide him with confidence, support, love, pride, and respect.

“It is not all sunshine and roses. We have dark days, but the sun always comes back.”

Michael’s Story began on October 29, 1998. Like all new parents, when our son was born, we had a vision of who our son would be and a plan for the path he would follow. We learned very early on that it is not up to us! At 5 years old, Michael was diagnosed on the Autism Spectrum and shortly after Bi-polar was added. Clearly, this changed the plan. New fears and questions for his path and future consumed our days. We saw many doctors, therapist, psychologists and gathered all kinds of information. It boiled down to the fact that he had developmental and social challenges and there is no real “treatment or plan” to help him.

We had to make medical and surgical decisions for our 5-year-old boy. Scary, right?! We searched for school programs that would support his social/behavior needs and still provide him with academic development. We enrolled him in a district Oak Tree program where we saw significant improvement in his behaviors as well as his academic base. At middle-school age, the time came to decide if he could continue toward an academic diploma or if he should transition to the BOCES Education Center to work on functional skills through age 21. During his time in the OakTree program, Michael became more verbal and aware of his differences and challenges. Still, he wanted some normal things; to “have a birthday party” like his cousins. We thought, “Who will we invite?” He had not developed “real” friendships. The other students in his class had varying disabilities, and we live a significant distance from them. We were sad, but filled his party with family and hoped he did not notice.

Eventually, we decided that although he had made academic progress, he would not be able to meet the requirements in the time provided to pursue an academic diploma and moved him to the BOCES Education Center – still in the Oak Tree program. His Physical Education Teacher, Beth suggested that he participate in Special Olympics. He seemed excited about it, so we signed him up for soccer in a local tournament where he competed in the skills division. That is where we bumped into Jeanne. Jeanne works at BOCES but is also a Special Olympic Ski Coach. We talked with her a bit, and she invited him to try downhill skiing. My husband was excited and was sure he would be able to do it – I was unsure and honestly a little scared (my husband reminded me that he definitely would not succeed if we did not let him try). His first season in 2009 as an 11-year-old was a struggle just wearing the boots and walking around. From that point on, he trained and competed in all the sports throughout the year: Soccer, Bocce, Bowling, Volleyball, basketball, Skiing, Hockey, Swimming, Softball, Track & Field and Cross Country running. For some he competed in the skills level, others he played with a team, but his favorite sports were skiing, swimming, and running.

His very first gold medal was received for alpine skiing. He now has a “Wall of Fame” displaying over 100 medals and ribbons. He now skies on black diamond trails, swims 100-meter races and runs 5Ks. Participation in this program has an immeasurable effect on him as well as us. His birthday parties have become a huge event. Attendees included family, athletes, coaches and their families. His birthday is in October, so we would have a bonfire in addition to sheet pizzas, games, music, cake, and ice cream. It is incredible to see the genuine friendships that developed and the support system created by the coaches and family.

The Special Olympics program provides opportunities for him and the other athletes to be in social situations of winning, losing, coping and supporting others. He has been on overnight trips and day trips all over the state to prepare for competition. They stay in hotel rooms or college dorms. They have roommates, sometimes athletes they do not know very well. There are schedules and timelines that have to be met and then they have to compete. These are life lessons. Throughout the year there are fundraising events and awareness opportunities that the athletes can participate in, such as the Torch Run, Cops on Top at DD, Bowl-a-Thon and Polar Plunge. Michael participates in all of these events and remembers to thank all of his donors and supporter after each event with a handwritten thank you. Special Olympics has helped him focus on his physical health by training to be stronger and have more endurance to compete. He has learned that part of that training is eating better. All are valuable lessons that will benefit him no matter what his future is.

My husband and I could not be more proud of the young man he has become. Our little blue-eyed boy is now a handsome, functional blue-eyed young man who will do amazing things. His story is truly a success story that others can use to remember there is hope and never to give up. Michael is now 20 and continues in the OakTree program where he has participated in the on-campus work program. This year he earned the opportunity to work off–campus at SUNY Broome. He is working in the cafeteria washing dishes and reportedly doing very well. Michael continues to and will always struggle with his challenges. I know that each day he has to tell himself he CAN.

I have cried more than 1,000 tears for sadness, loss, regret, fear, and despair since his diagnoses. When my tears ran dry, we started again. I continue to shed tears, but these days they are generated by pride and excitement for his accomplishments. There are so many other things that are amazing about Michael and our journey with him to share. This time I wanted to focus on the Special Olympics program. We are confident that Special Olympics is responsible for showing him that he CAN. He is the only one who can make things happen, but he has to know that he is supported in the effort. My husband and I have worked through the years by identifying his weaknesses and building his strengths!