Finding A Place of One’s Own 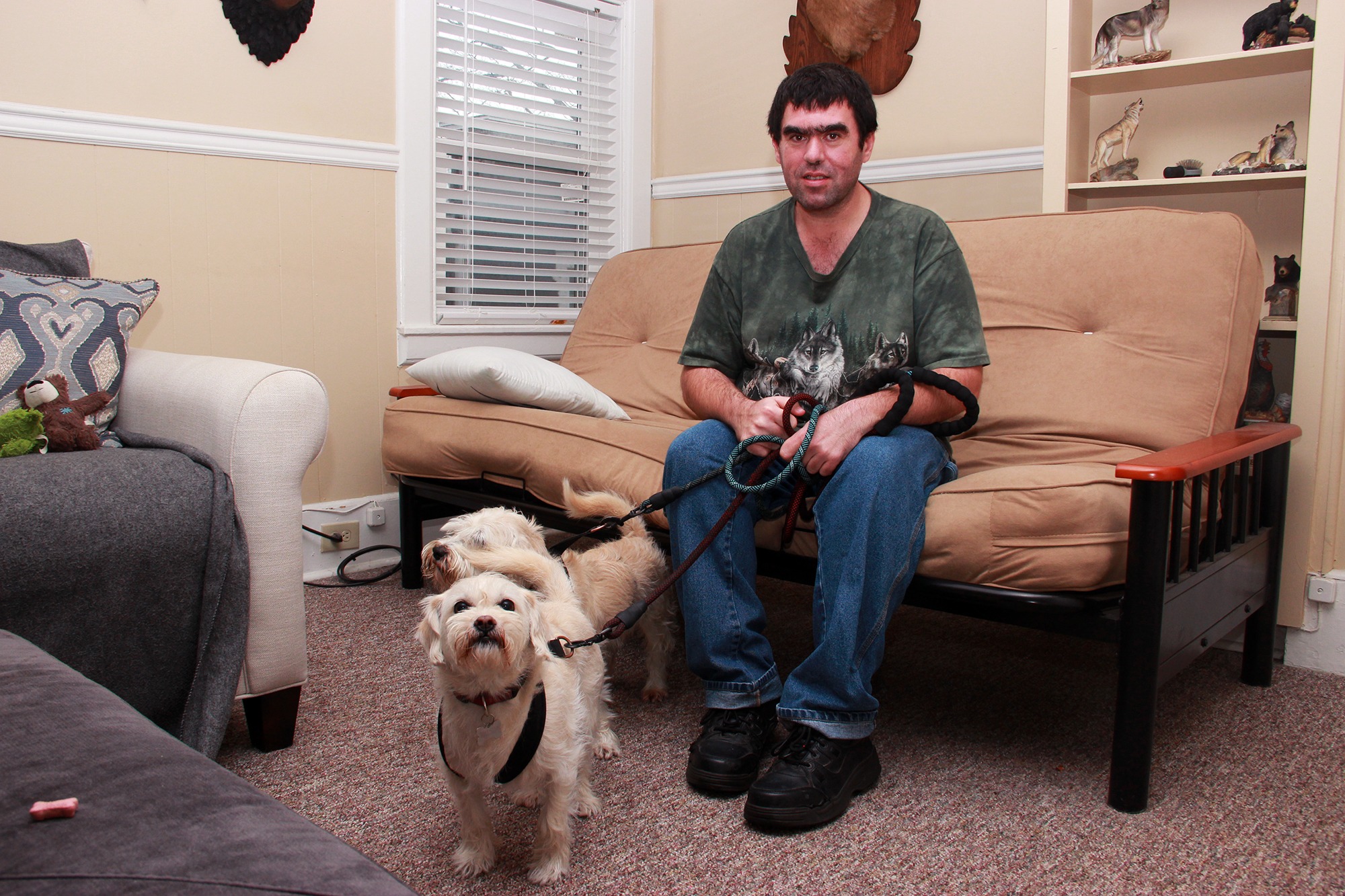 Patrick Keenan lives in a private apartment in Oneonta with his two small dogs, Chip and Dale. Chip and Dale have been close companions of Patrick since they were pups and they take daily walks together throughout the neighborhood. Often, they’ll take different routes, which gives them an opportunity to see and learn more about the city. Taking the dogs for a walk is one benefit of Patrick’s current living situation, but it took a bit of work to get him here.

Ellen Pernat is a care coordination manager at Southern Tier Connect who started working with Patrick in 2019 when she first started with the agency. Patrick had been living with his parents at his family home in New Berlin. But when his parents were moved to a nursing home, the house was put up for sale. Patrick was on his own and needed to find himself a new home. After connecting with Ellen through STC, it was evident that the first problem they would have to overcome together would be to locate a home for Patrick that also allowed Chip and Dale. Ellen used her network of local supports and worked with Patrick’s cousins, Tom and Karen Koch, to find the perfect apartment for Patrick within two months.

Growing up, Patrick and his family spent a lot of time in Upstate New York. This made their decision to purchase a home in South New Berlin an easy one; rent downstate was high and they preferred the bucolic landscape over the fast-paced city. Further, Patrick excelled in the high school environment here, allowing him to study conservation at BOCES while still in high school.

Patrick’s father enjoyed hunting and the two of them often hunted together for both deer and turkey. Patrick has kept many mounted deer heads and antlers that he and his father collected over their years of hunting together. Patrick’s passion for hunting has led to a volunteer opportunity with Sportsman Adventure in Southside Oneonta for a few days a week. He has also volunteered with Friends of Recovery. After 20 years of living in South New Berlin, making the move into the private apartment at Springbrook’s Oak and Elm Community Home in August 2020 was a big change for him as he had to acclimate to a city setting, meet all new staff members and residents and, his dogs had to be on leashes at all times. These were all big changes, but over time, he has become part of the family at Oak and Elm and likes being part of the community.

Patrick’s latest endeavor is to learn to cook, after years of making sandwiches and utilizing a microwave to make hot meals, Patrick is learning meal preparation and cooking skills with cooking classes provided by the Cornell Cooperative Extension, which he takes in person at Springbrook’s Family Engagement Center, with the assistance of a nutrition program educator and Patrick’s community habilitation staff member, Karen M.  After settling into his new home at Oak at Elm, Patrick has found opportunities there that he might not have elsewhere, including the importance of nutrition and some further cooking skills. The direct support professionals at Oak and Elm have helped him to hone his cooking skills and he cooks dinner once a week in the main house. 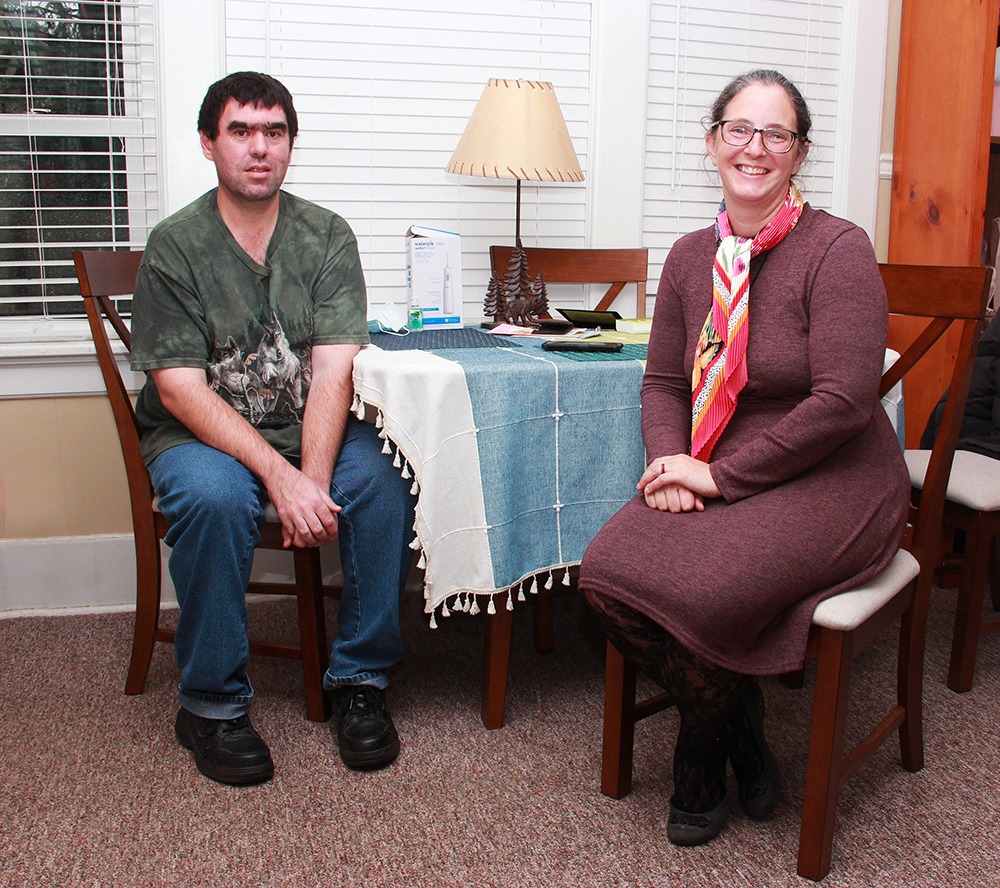 Ellen does whatever she can to make sure Patrick is provided with the support he needs. They meet regularly to make sure he’s on track with his goals and she provides assistance with the administrative end of making connections for him. But sometimes, it also means doing fun things too. Ellen and Patrick get together for lunch once a month. Ellen and Patrick joke that even though they try new restaurants every time, Patrick always orders a turkey sandwich. “My job at STC is so rewarding because I get to form these great relationships with people. It just feels like I shouldn’t get paid, because it feels like I’m going out with a friend,” Ellen said.

Patrick likes to attend local fairs to see and hear live country music. Karen M., Patrick’s community habilitation staff, makes frequent visits with Patrick, helping him with transport to his job at Sportsman Adventures, or joining him at the Huntington Memorial Library, where he enjoys reading.

Patrick’s parents both passed of COVID-19 in February 2021, so Tom and Karen have been Patrick’s supports in many different avenues. Karen and Tom live on Long Island, where most of Patrick’s extended family live, but visit regularly and are strong advocates for Patrick’s independence. With the assistance of Ellen, and the support of his cousins and his Uncle Jack, Patrick lives a full life independently and is learning to be as self-sufficient as possible. Patrick’s cousin, Karen, said, “our family is very appreciative to all the staff that have helped Patrick on this journey—especially Ellen who is ALWAYS available for whatever reason!”