Suda Handelman grew up in Unadilla, New York. So when she and her husband, Mark, decided to move away from New York City to be closer to her father, there was no fear of experiencing culture shock. One major concern they did have, however, was the type of supports that would be available (or more accurately put, would perhaps not be available) for their 23-year-old son, Max.

Max was diagnosed with autism as an infant. He grew up in the Big Apple, spending his elementary and middle school years in the public school system, where they had a good autism support program in place. Then, in 2006, the Handelmans moved to Bucks County, Pennsylvania, where Mark accepted a position to run a children’s welfare agency. The suburban life of Pennsylvania was an easier setting for Max, where he enrolled in the central school system. But after his graduation, Suda and Mark discovered that finding adult supports for Max was extremely difficult. When they tried to enroll Max in a day habilitation program, the waiting list was five to seven years. “I am connected in this field,” said Mark, “and I couldn’t even get services for my own son.”

Moving to a new state with an autistic adult dependent can be daunting. The Handelman’s first move to Pennsylvania seemed overwhelming, even though Max was in his teens at the time. When they decided to move back to New York State, they acknowledged the psychological obstacles that accompanied it—both for them and their son. They contacted OPWDD, and the representative there gave them a choice of three CCOs. They had no basis to make a decision, and so they asked the rep for her opinion. She said, “go with Southern Tier Connect.” 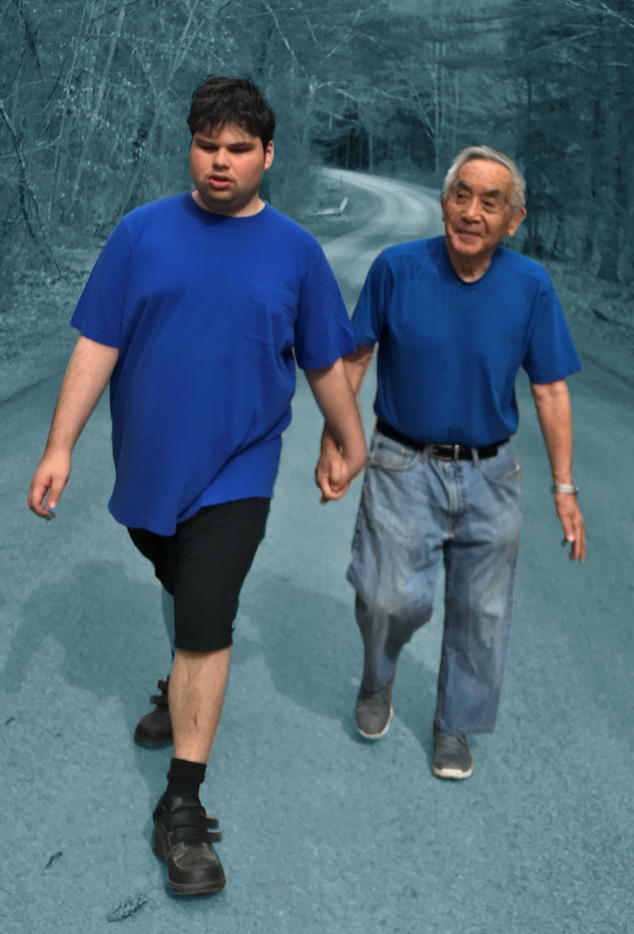 Above, Max Handelman walks with his grandfather up a country road.

“After all these years, and all those services,” said Suda, “this was the EASIEST process I have ever encountered. It was completely seamless.”

By the time the Handelmans contacted STC’s Intake & Eligibility Lead Coordinator, Juliette Wentworth, to their surprise, she had already submitted their Medicaid application. “Previously we had to do all our own paperwork,” said Suda. They were quickly given Kara Grady as a Care Coordination Manager, for which they felt “greatly blessed.”

Max is a charming young man who communicates with expressions and movement. With the right structure and supports in place, he can be very engaged. Presently, though, he is motivated by very little without the structure he had at school. He spends much of his time with electronic equipment and enjoys watching videos and movies in his DVD collection.

Kara is working with the Handelmans to get Max into the Pathfinder day program, and Suda is excited for Max to get some personal one-on-one time to increase his motivation for other activities. “It’s been a tough year with all the programs having been shut down,” she said, “but now, thankfully, we’re beginning to see trickles of people coming back to a more normal way of life.”

“We want to see Max strengthen his self-reliance and self-esteem when he’s not around us,” said the Handelmans. “He’s a smart kid but he relies on us too much—all his communications rely on us—so we’re hoping that by increasing his social interactions he will gain a greater comfort and confidence level when he’s not at home. We want to see him expand his horizons and his interests after being homebound for nearly three years.”

Kara has also helped the Handelmans find several doctors for Max. She suggested physicians with Bassett Healthcare who are near Pathfinder and are familiar working with people who have special needs. “Everyone here at STC is so well connected to the community because it is such a small area and we all rely on each other for supports,” Kara said.

“At STC, we feel like we’re in good hands,” said the Handelmans. “Max feels so much more at home than he did in NYC and in Pennsylvania. We were so worried about what we would do here in Otsego County and it is exactly the opposite of everything we feared.”