Finding Solutions in a Crisis

2021 had just started when Madison, an STC care manager, received an urgent call about Richard. He was on another care manager’s caseload but the situation was overwhelming. Right away, Madison stepped in to help. 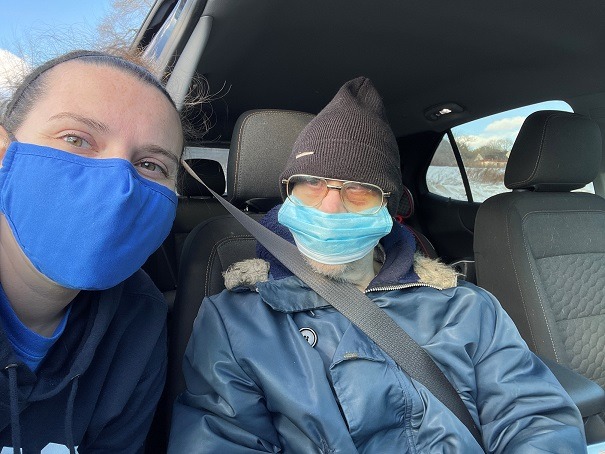 Above, Madison and Richard pose for a selfie in the car.

Richard lived in Cortland with his sister, who acted as his primary caregiver. Outside of his day program, his sister took him to his appointments, was his appointed representative payee, and she made sure he stayed healthy and safe in their home. Unfortunately, Richard’s sister became ill with a life-threatening condition and had to be hospitalized, leaving him with hardly any assistance. Upon receiving this news, Madison quickly coordinated respite for Richard. Due to the pandemic, respite care was extremely rare and hard to obtain. Working with staff from Richard’s day and community habilitation programs, they arranged for 24-hour care for Richard while his sister was in the hospital.

Fast forward to February; Richard’s sister became ill again. Sadly, this time it was worse—she had an infection which rendered her unable to walk, leaving Richard once again without any support in his home. Madison immediately put Richard on an emergency waitlist to get him residential supports. Until that could happen, she and other staff stopped by the house regularly to make sure he was taking baths, eating well, and was getting his proper medication. Then, Richard’s sister went back to the hospital.

Typically, if a person with I/DD suddenly finds themselves without care, they are brought to the emergency room until New York State can find placement. Emergency placements are often done without any preference from the person who needs the support. Above all, Madison didn’t want to leave Richard at the mercy of the State, where he could be placed into a home far away from his community, uprooting him from his day habilitation program and his friends.

“Being a care manager is definitely a hectic job at times,” said Madison, “and I’ve never quite dealt with a situation like this before. You could say it was my first serious crisis!”

Once again, Madison took aggressive action.  She scoured housing availability to find Richard a home close to friends and the supports he loves, both priorities for Richard. Fortunately, it happened that Unity House in Ithaca had an opening becoming available.

Madison helped Richard with every step in the process. Richard had to undergo many procedures—including a COVID test—before he could move in, and Madison was there for him every step of the way. Within a month, Madison had gone from learning about the situation to getting Richard into a safe housing situation.

“At the time, I felt overwhelmed,” she recalled, “but once I knew that Richard was in the respite house, I was super grateful that we found that opportunity for him and that he had the services that he did. His FSS respite, day hab, and community habilitation support providers were a huge help in making sure he had staffing and stayed safe. This job is hard and can be crazy, but it’s rewarding in times like these.”